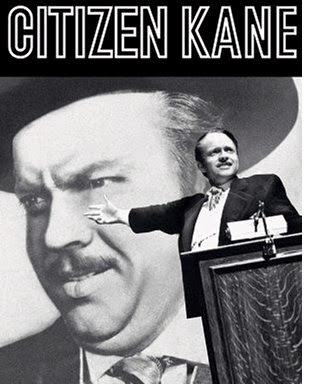 What can be said about Citizen Kane, topper of Best Of lists for half a century, staple in college film courses, and buster of conventions and assumptions about film-making?

No less an intellect than Welles, the boy wonder with a career on the stage before his 18th birthday and omnivore of all things artistic and intellectual, could’ve produced such a towering monument.

The story centers around a gaggle of reporters chasing the meaning of the last word, “Rosebud,” of Charles Foster Kane, an iconic and enigmatic newspaper publisher. Their journey takes the viewer through a tour of Kane’s life and rise to fame and power.

We see that when Kane his father and then his mother die, and the boy is sent to live with the tycoon Walter Thatcher, whose memoirs become one of the clues used by Jerry Thompson, one of the reporters investigating the origin of “Rosebud.” Kane’s relations with Thatcher were thorny, but that can probably be said of his relations with many of the people in his lives, his various business associates and wives.

Welles biographer Barbara Leaming gives an apt description of the film’s structure as “exceedingly discontinuous,” explaining, “since the film tells Kane’s fractured story from multiple points of view, the spectator apprehends it in bits and pieces, the jagged fragments of a life.” She further asserts, “the special genius of the film is of course not Kane’s story...but the peculiar way in which the film discloses that story.”

Not only was the film a bit ahead of its time by structuring the story in little fragments from the POV of various of Kane’s acquaintances, it also resisted categorization into genre. Biographer Charles Highman says that the film was “sometimes tragic in mode, more often comic...moving from burlesque to moments of blank despair, the picture resembles a kaleidoscope, the splintered essence of the American experience.”

However, to most viewers, it also resembled a biography of newspaper mogul William Randolph Hearst, who sought many injunctions to stop the movie’s release, and who would antagonize Welles for years. The similarities between Kane and Hearst are prodigious. Hearst was an enormous fan of Abraham Lincoln, and in one shot, Kane gazes with rapt attention at a portrait of Lincoln in the White House; both Hearst and Kane were critical of corruption in business and advocates of free speech. While Hearst was critical of President McKinley, Kane was critical of Monroe. But more striking, famous lines in the movie concerning the Spanish American War come nearly verbatim from a well-known telegram exchange between Hearst and artist Frederic Remington, including the zinger “you furnish the pictures I’ll supply the war.” Eerily, the fictional Sunday circulation of Kane’s paper matched that of Hearst’s Examiner’s actual circulation, 62,000.

Yet there were also autobiographical shades in the work. Kane’s life as an orphan was paramount to the film; Welles lost his father when he was only eight (the same age Kane was at when his mother died) and his mother in his late teen years. Welles portrayed Kane much like himself as a bright and energetic teenager who was always striving and yearning, and who wasn’t quite above using some of those around him to meet his goals, an unsavory trait that would cost him close friendships.

It was well-received by critics upon release. It was also nominated for no less than nine Academy Awards, though it won just one. The political undertones surrounding this perhaps surprising development involved, chiefly, backlash from a fuming W.R. Hearst, which some feel led to bloc voting against Welles and his crew.

The American Film Institute would eventually name Citizen Kane number one, atop its 100 Years...100 Movies list. The movie has topped the annual list of the British publication Sight and Sound fifty times, and has topped countless other similar lists.