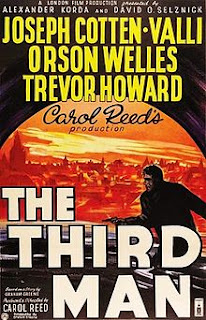 This 1949 classic stars Welles, Joseph Cotten, Alida Valli and Trevor Howard, and chronicles pulp novelist Holly Martins who travels to Vienna and ends up investigating the death of an old friend, Harry Lime. He eventually discovers that the man he’d seen in a coffin at the narrative’s outset had not in fact been Lime.

It won Oscars for Best Cinematography, Black and White, and for Best Director (Carol Reed).

Welles played the role of Harry Lime, who, while being a major entity in the narrative, did not appear on screen for much of the movie. Welles was responsible largely for acting in one scene, a chase through the sewers.

Upon arriving for his brief stay in Vienna, Welles found himself staying next door to his fetching co-star, Alida Valli. However, nothing romantic developed between the two, a circumstance he would later bemoan.  “I see The Third Man every two or three years,” he told biographer Barbara Leaming, “and I look at Alida Valli, and I say, ‘What was in your mind when you were ten days in Vienna and you didn’t make a move?’ She drives me mad with lust when I see her in it.”

Another reminder of the experience came from the fact that the soundtrack, haunting zither music by Anton Karas, became such a sensation. Author Charles Higham asserts that “for years afterward, whenever Welles entered a restaurant that had an orchestra or a pianist, the musicians were inclined to strike up the Third Man theme.

Later, Welles would have a chance to give the character Harry Lime an entirely new life in the Radio series The Lives of Harry Lime.  These recordings and more can be heard from Old Radio Cat.
Alida Valli Harry Lime Joseph Cotten The Third Man Trevor Howard