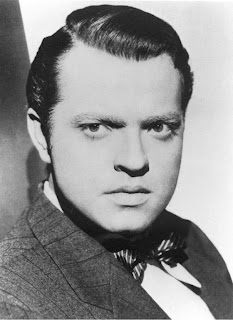 The Federal Theatre Project (FTP) kept on rolling with a New York production of The Tragical History of Doctor Faustus, which opened at Maxine Elliot’s Theatre on Jan. 8, 1937. It was one of many Welles works in which he cast himself in the lead role. Also starring were Charles Peyton, J. Headley, and Bernard Savage.

The rave reviews the play garnered established the (still just twenty-one year-old) Welles as one of the greatest living talents in the world of drama. The Sun judged it to be the FTP’s “principal artistic achievement.”

What allows us to insert “startling” before the phrase “artistic achievement” is that during the play’s run, Welles was also recording a radio show twice a week. He’d arrive at the radio studio at 8--in Faustus makeup--buzz through his show, jump, bank robber style, into a waiting car, dash to the theatre, act in the play he was directing, and then go back to the studio to broadcast a show for the West Coast. For his radio shows, it was “hand me a script and I’ll do it,” no rehearsals. Remember, he was only twenty-one.